So I’m doing laundry in Duncannon, PA, and needed to clip my nails which took me outside where I met this dude. For whatever reason, I asked him “so, what’s the history of this area”?

The next 45 minutes were completely fascinating. He told me about the history from the mid 1700’s where the white man lived on one side of the Susquehanna river and five Indian tribes lived on the other. His family goes back many generations in this area. He told me how when there were “disagreements”, how each side dealt with the other. It was completely brutal on both sides. The white man were farmers, the Indians hunters.

He also told me about some of the “artifacts” he has found in the area, again, pieces of history which are quite fascinating like a piece of jade that had carvings of a monkey, Sasquatchi, lizard and other animals. The archeologists he showed it to explained what it meant but before we got that far he had to go. Anyway, the point of this post was to comfirm that once again, random questions I ask strangers have led to some of my most interesting conversations! 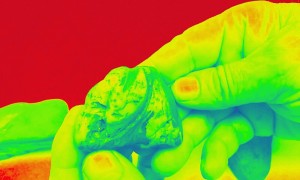 *Update. I ran into him later that night, he had a few artifacts with him, I tried out my thermal cam app, can you see the face?