Somewhere in here is where Jason tweaked his knee. I was walking ahead and thought I’d be waiting about 30 mind for him to catch up. After 1.5 hours I figured something happened and then sure enough, he pops up over the hill limping. His knee was already swelling so naturally I called him a nancyboy and told him we needed to pick up the pace;-)

Actually we spent about another 2 hours making our way to a road where we were able to call a taxi to take us to a hostel. There was no way he could continue so he made arrangements to depart the next day. It was really great seeing a familiar face I’m the trail, and very nice to have had a few campfires where we sat around and swapped old football and war stories.

The quote above is what he said as we were walking out…kind of summed up his time on the AT.

Here’s what done him in… 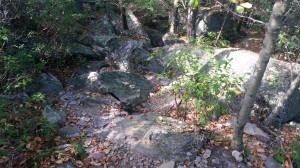