My buddy Jason joined me on the trail a few days ago. It was very nice to see a familiar face plus…he brought some much needed supplies and his bull headed determination which is kind of what it takes to push yourself up a mountain, then down a mountain.

We each had our own hotel room the first night. To be honest, I had not had dry clothes for 7 days straight at that point and so my things were a bit…pungent is probably a good word. He was a trooper and hung out in my room for a bit but to be honest, between my shoes, pack and pole straps, there was enough stench coming off to clear a large room! Even I, after showering and shaving, could barely stand the smell. Luckily the room had its own a/c and I could crank it up to get some circulation going. It sure seems like keeping the air moving made things a bit more bearable…but based on his comments on the days after we left the hotel it was pretty awful:-)

When we made it to the trail the following morning the first section we were doing was affectionately known as Agony Grind. It was basically straight up and over boulders for hundreds of vertical feet. So a nice easy intro to the AT for his first climb. We made it to the top, his starting weight (body and pack) was a skosh over 300 lbs. I was closer to 250 (I slipped a couple of liters of water in his pack when he wasn’t looking, it was easier than carrying it myself:-) I find it easier to hike uphill using small steps but he powered his way up the hill using full strides, impressive!

Anyways, we made it to the top (did I forget to mention it, was also raining?), and here’s the proof: 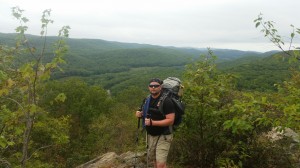